Born in Marysville, California, Julia E. Vera is the oldest daughter of immigrant parents from the states of Guanajuato and Zacatecas, Mexico. As a child, she was raised in two distinct cultures. She spent her summers with family in Guanajuato and the rest of the year attending public school in the United States.

As a result of this binational experience, she grew to love both her Mexican and American cultures and gained a true understanding of the hard life of the immigrant worker in the United States.

She received her bachelor’s degree from California State University Sacramento while working full time for Bank of America. She later transitioned to work at our State Capitol as the scheduling director for then-State Assemblymember Antonio Villaraigosa. She went on to work at the Department of Labor’s Regional Headquarter located in San Francisco before enrolling in law school and returning to Sacramento to attend UOP McGeorge School of Law. She received her law degree in 2005.

Her experiences in banks, with politicians, and the federal government, convinced her that the best way for her to bring justice to families and workers was to directly represent families and workers as their advocate. Since receiving her license to practice law, she has made it her mission to work zealously for every family and every worker she represents.

One of her more famous cases involved Ms. Vera representing “la tamalera” (aka “the Tamale Lady”) against removal and successfully defending her in that case.

The “Tamale Lady” case received international attention and resulted in a change in California state law outlawing the unlawful and discriminatory detention of immigrants held for federal immigration agents. 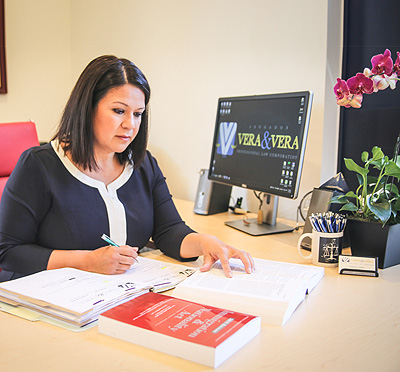 Attorney Hugo I. Vera is a trial attorney and enjoys facing off against the government in defending his clients against removal and in defending those facing long prison sentences.

Born in Tamazulita, Jalisco, Mexico, a small town in the green and fertile hills of central Jalisco. This region was the epicenter of the civil war of the Cristeros. This war, between poor subsistence farmers and the landed wealthy and the church for land distribution was Mr. Vera’s first lesson in the workers’ struggle for social justice and economic opportunity.

Mr. Vera completed his Bachelor’s degree at University of California Berkeley majoring in economics and politics. He spent one year at the University of Bordeaux in France as a foreign exchange student and took advanced courses in economics and politics in French. He received his master’s degree in international politics at the Monterey Institute of International Studies, in Monterey, California.

After receiving his master’s and before receiving his law degree, he worked as technical advisor in international economics with the Mexican government at the Palacio Nacional in Mexico, D.F., program director of small claims with La Raza Centro Legal in San Francisco, California, technical advisor to microenterprises with Acción San Diego in the border region of San Diego-Tijuana, and as legal assistant at his brother Juan J. Vera’s law firm in Stockton, California.

Mr. Vera moved to Sacramento, California, in 1999 to attend UOP McGeorge School of Law and received his juris doctorate in 2003. 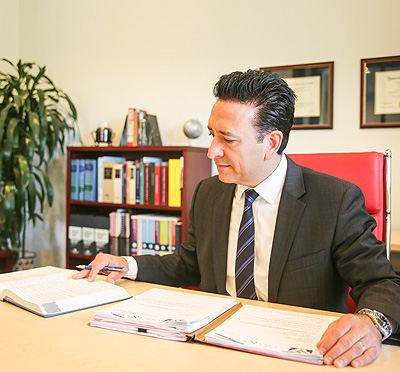 Attorney Carmen D. Olmedo has been with Vera & Vera for nearly two decades, first researching case law and now as a civil and criminal litigator.

Ms. Olmedo is the daughter of immigrant parents from Michoacán, Mexico. Ms. Olmedo spent her youth in Michoacán before her family migrated to the United States in 1993. Her family’s immigration experience shaped her desire to help immigrants and marginalized communities.

She moved to Sacramento, California, to complete her formal education at California State University, Sacramento. After earning her degree in Sociology from CSU Sacramento in December 2010, she decided to pursue her law degree at Lincoln Law School, Sacramento.

In her leisure time, she enjoys travelling, running, yoga, and hiking. Most of all, she enjoys spending time with her family, including her young son Santiago. 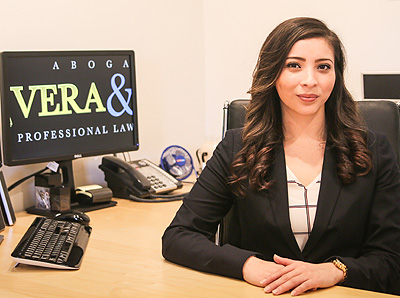 © 2022 VERA & VERA PLC – Nothing on this site is legal advice. The information on this website is for general information purposes only and is subject to change without notice. The selection of legal counsel is an important decision. Contacting VERA & VERA PLC via our website does not create an attorney-client relationship. Confidential or time-sensitive information should not be sent through this form. The testimonials, case results and/or endorsements do not constitute a guarantee, warranty, or prediction regarding the outcome of your legal matter. Please call our offices directly for more information.